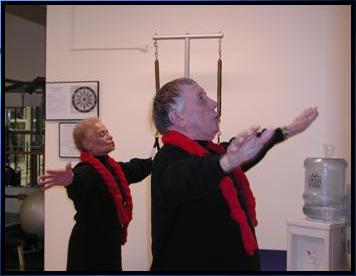 The PMA Annual Meeting in Las Vegas was fantastic!  Many of the teachers that I have known forever are starting to “rack up the years” of teaching.  These men and women are inspirational!  If we could wrap ourselves up into one burrito, we would really be astounding.  That is why the meeting is an important opportunity to share ideas.

Sadly, in the last two years, the Pilates community has lost two of First Generation Pilates Teachers, Kathy Grant and Ron Fletcher.  Like all of Joe’s First Generation Pilates Teachers, Kathy and Ron inspired many people.  Their work will be remembered by many and shared. Mary Bowen and Lolita San Miguel, taught last week at the PMA Annual Meeting.  Both are also First Generation Pilates teachers.  Each First Generation teacher had a different experience of Joe and his work.  Mary and Lolita remind us that Joe taught everyone differently.  He taught the person.  The prescribed lists and order of Mat and Equipment work are efforts of schools to establish a common denominator for assessment of the new students in training.  This is necessary and expedient as long as critical thinking is still the major component of assessing and teaching student programs.

When I present Wunda Chair, I always state clearly that this was what Kathy Grant did in Santa Fe in 1992.  I cannot say for certain that my notes reflect her truth in later years.  Also, I am subject to selective memory just like any other student.  Ron Fletcher never did a prescribed list of Pilates exercises.  He did improvisation with intention.  Ron had a natural gift of reading the class and responding in the moment.  It was sometimes frustrating to his devotees that we would notate a movement and then he would do something different with the breath or the count on the next day of a workshop.  When I began to annotate his work with his permission, I would sit him down and say, “Ron, you do this sometimes and that sometimes.  Sir, how would you like that to be notated for the students?”  And he would answer.  But Ron did not know the program of Pilates exercises as a defined system.  He lived in the moment.

On May 19, 2000, Ron Fletcher awarded me his certificate of Master Teacher.  I would like to say that I use that title in respect to him.  I spent 13 years with him and I attended every workshop that he taught.  One year he taught 18 workshops.  I did this to be in process with him and to witness how the work changed slowly over time.  I stopped counting at 90 workshops although I kept the flyers of each one.  Earlier he awarded me a certificate as a Senior Teacher.  That is one of my master moments.

Kathy Corey was Ron’s assistant.  She has a lovely studio in her house near San Diego.  I was invited to come to her house to “spend some time with Ron and with her”.  When I arrived, I was informed that Ron would be testing me in a class setting.  TAKE A DEEP BREATH, PAT!  The class consisted of Kathy, Paul (Kathy’s husband), Amy (Kathy’s daughter), Patrick Dempsey, and Ron.  I proceeded to teach.  When presented with a surprise and a challenge, the only thing to do is press onward with what you know and not try to do tricky things.  Ron always preferred clarity in the ABC’s and was not impressed with pyrotechnics.  I got to the Short Spine Massage.  He stopped me.  “Where did you get that, Miss Pat?”  I explained that I had taken a workshop with one of his protégés the weekend prior and had paid close attention.  The Short Spine Massage he taught was slightly different and very specific regarding EVERYTHING.  He got up and corrected me.  Then he returned to his reformer and I made the adjustments, moved onward and finished class.  Later that night Ron, Kathy and I went to his favorite Chinese restaurant and ate walnut shrimp.  He told me that he was pleased and that I had passed.  Now, I realize that I was fortunate to have been tested by Ron.  At the time it seemed just a normal sequence of events, but I am not certain how many of us received that honor.

Another master moment was when Deborah Lessen invited Ron to come to New York City to do a workshop.  By that time, I had moved into the position of assistant.  During the workshop, he presented the red towel class.  Kathy Grant had come to watch.  She had suffered an injury and apologized for not being able to participate.  She was presented with her own red towel which she wrapped around her neck like a scarf.  Ron would have me in the front beside him as he taught.  Occasionally he would tell me to keep them going and tell me which pieces of choreography that I should present.  Then he would walk down the side of the room.  Every eye in class was peeking at him, stomachs pulled in, shoulders dropped down and the attention meter went skyward.  Suddenly I looked at the back of the room.  OH MY!  RON FLETCHER AND KATHY GRANT ARE IN THE BACK LINE FOLLOWING ME TEACH THE CLASS!  Now that is a moment that I will never forget.

Things were not always easy and I moved onward.  I was able to visit Kathy Grant with Yuuko Igarashi when she was in the hospital after her first stroke.  She was on oxygen.  She was hopping around the bed showing Pilates exercises! Last year after the PMA Annual Meeting, Michele Larson, Dianne Miller and Kathy Corey encouraged me to call Ron.  I am grateful to say that we both were able to say that we loved one another. I have been blessed.